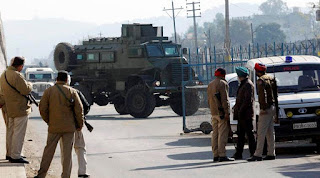 Dialogue with Pakistan must go on. But India urgently needs counter-terrorism capacity-building.

Exactly a week after Prime Minister Narendra Modi landed in Lahore, hoping to “turn the course of history”, his ambitious project is being tested by fire. This weekend’s terrorist attack on Pathankot was no surprise; indeed, many in India’s intelligence community had predicted it. Each past effort at peace, after all, has provoked similar strikes. It is too easy, though, to attribute the strike to unnamed spoilers. The more complex truth is that while Pakistan’s all-powerful army seeks to avert a military crisis that would drain its energies at a time of grave internal turmoil, it does not seek normalisation. Pakistan’s army chief, General Raheel Sharif, has made it clear that he will not accept the status-quo on Kashmir. The strike on Pathankot, carried out by the Inter-Services Intelligence’s old client, the Jaish-e-Muhammad, serves a very specific purpose. It signals to Indian policymakers that the Pakistan army can inflict pain, but at a threshold below that which makes it worthwhile for New Delhi to retaliate. Barring reflexive hawks, after all, no one would argue that it makes sense for Delhi to risk even limited conflict after the strike on Pathankot.
Read full article here

Stay the course after Pathankot

Within the short space of a month, Prime Minister Narendra Modi and his government have gone through the entire cycle of India-Pakistan ties, as they have played for the past two decades ever since the two countries agreed to a composite, structured dialogue between them. There has been talks about talks, talks about terror, a brief moment of euphoria with gestures of renewing ties from the leaders, followed by an attack. While Mr. Modi’s Lahore landing was certainly bold, it has not yet proven to be the game-changer that perhaps he too hoped it would be. Instead, the same kind of terrorist attack that has always accompanied India-Pakistan engagement hit Pathankot in the early hours of Saturday. As with similar attacks in the past, it should not surprise anyone if the terrorists came from Pakistan, and belonged to an anti-India group the Pakistani army has neatly sidestepped in its otherwise fairly successful crackdown on terrorists in the past year. Frustrated by their inability to hurt India, the Jaish-e-Mohammad (JeM), the Lashkar-e-Toiba (LeT) and others have tried to retain their relevance by instead targeting the India-Pakistan dialogue process time and again. By not calling off talks immediately after the attack, the Modi government seems to have indicated it will not allow these groups the satisfaction of achieving those aims. A sustained dialogue is the only fitting answer to terrorist groups and to their handlers inside the Pakistan establishment who wish to destabilise the peace process. In fact, External Affairs Minister Sushma Swaraj told Parliament last month that India would not “be provoked by saboteurs who want to stop the dialogue process in one way or another”.

Exactly a week after Prime Minister Narendra Modi touched down in Lahore to meet Prime Minister Nawaz Sharif, the terror attack on the Pathankot Indian Air Force base has come as the first big challenge to his new peace initiative with Pakistan. This strategically important air base barely 40 km from the border houses MiG-21 Bison fighter jets, MI-25 and MI-35 attack helicopters, Pechora surface to air missiles, other defence missiles and surveillance radars. It provides logistics support to the entire J&K theatre and also the operational range for deep air raids into Pakistani territory. Intercepts show the terrorists’ handlers telling them, “Choppers aur planes ko uda do.”
This attack has been contained but it follows a fixed pattern: Every major peace move is preceded or quickly succeeded with a terror attack on Indian soil, designed specifically to put a spanner in the works. Because there has always been a powerful segment within the Pakistani ‘deep state’ that is hostile to the idea of peace with India. Indeed, a senior Indian intelligence official has been reported as saying that the Pathankot attack may have been planned by a Pakistan army faction peeved at being bypassed by the ‘fait accompli’ of Modi-Sharif jugalbandi.

It's tough, but stay on track

Disengaging with Pakistan, after the Pathankot attacks, is to play into the hands of terrorists
The terrorists and masterminds of the Pathankot attack evidently did not want the recent bilateral cheer to last. In less than 10 days of Prime Minister Narendra Modi’s surprise visit to Lahore, which prompted hope that 2016 will see a different tenor in India-Pakistan relations as opposed to the recriminations seen last year, terrorists attacked an Indian Air Force base in Pathankot under the cover of darkness on Saturday morning. NSG personnel were rushed to Pathankot prior to the attack acting on intelligence but the fidayeen operation has resulted in heavy casualties for Indian security forces, even as the detail of the assault is not yet fully known.
The attack puts pressure on the NDA government in view of Mr Modi’s bold visit to reset bilateral ties. It is an outrage but New Delhi must still persist with its policy of engaging Islamabad. Such an attack has long been expected as an upswing in ties has usually coincided with terrorist strikes in recent years. It is a fact that the Pakistani establishment is by no means monolithic in character and various elements work at cross purposes, often acting to undermine the forward-looking efforts of its civilian government. India’s policy must be guided by discerning the motivations of the masterminds. The attack was geared to drive a wedge between Mr Modi and his counterpart Nawaz Sharif, who are attempting to bridge strategic differences and explore regional cooperation. For that matter, the two attacks in Punjab at Pathankot and Gurdaspur (in July) appear expressly aimed at undermining the possibility of more economic exchange between the two provinces of Punjab in both the countries. Saturday’s attack could also be designed to sow fresh suspicion in Indian minds about the intent of Pakistan army chief General Raheel Sharif, as many will be quick to assign responsibility to Rawalpindi.

Attack on Pathankot air force base

WHILE Pakistan-India ties are necessarily about a great deal more than terrorism, the latter is perhaps the one threat that can derail the relationship yet again.

It is too early to know the facts about what transpired at an Indian air force base in Pathankot but already some challenges — and opportunities for broadening and deepening anti-terrorism efforts — can be identified.

Firstly, the Pakistani government has done the right thing in quickly and unequivocally condemning the terror attack and offering its cooperation to India.

Having suffered grievously from militant violence and having resolved to fight militancy in all its forms, Pakistan should rightly offer its support to any state confronting terror threats. It is a welcome change that Pakistan now officially and directly condemns terrorist attacks regionally and internationally and offers its assistance where necessary.

The years of ambivalence appear to have been left behind.

Yet, the challenges are formidable. The hostile reaction by much of the Indian media to the alleged involvement of Pakistanis in the attack even before the barest facts could be established underlines just how difficult peacemaking will be.

Courageously, however, the Indian government has appeared to resist media and hawkish pressure and declined to go into attack mode against Pakistan. It is all too easy to reap political capital in the midst of a major terrorist attack by targeting perceived external enemies.

The preferable approach — one that hopefully the Indian government will continue to adopt in the days ahead — would be to quickly establish the facts. If no involvement of Pakistani nationals is found, the information should be shared with the Indian public.

If Pakistani nationals are found to be involved in the attack, the information should be shared with Pakistani authorities as quickly as possible — and reciprocal steps should be taken here. To thwart the political motives of terrorists, a sensible, cooperative approach by both governments should be key.

Inside Pakistan, there needs to be some reflection. Has Pakistan’s inability to deal adequately with India’s concerns about the 2008 Mumbai attacks caused cynicism about Pakistani intentions and led to Indians being automatically suspicious of Pakistan whenever a terrorist attack occurs in their country?

If so, does that not harm Pakistan’s own interests? There is still too much defensiveness about the terrorism threat on the Pakistani side — perhaps less so in the political government, but certainly in the military-led security establishment.

There is no conceivable gain that Pakistan can make through terrorism when it comes to key disputes and issues with India. Not only is that abundantly clear outside the state apparatus, a generation of senior officials, both military and civilian, have publicly and privately acknowledged and accepted that.

If that is indeed the case, then Pakistan ought to lead confidently on the regional terrorist threat. No one — at least no one credible — can accuse the Pakistani state of not wanting to or failing to fight the banned TTP today. The day must come when the same can be said for all terror threats, internally, regionally and internationally.